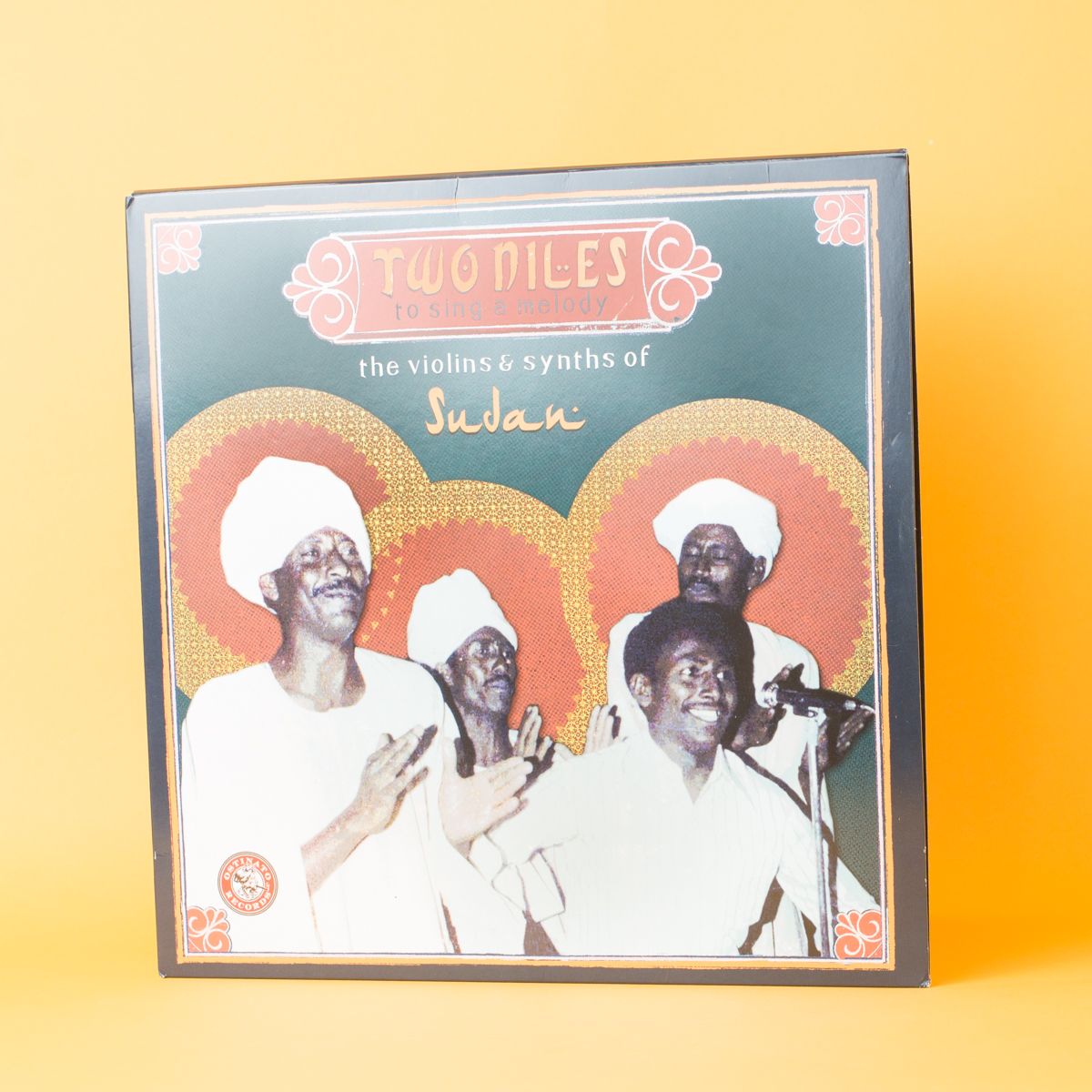 Two niles to sing a melody

In Sudan, the political and cultural are inseparable.

In 1989, a coup brought a hardline religious government to power. Music was violently condemned. Many musicians and artists were persecuted, tortured, forced to flee into exile — and even murdered, ending one of the most beloved music eras in all of Africa and largely denying some of Sudan's gifted instrumentalists, singers, and poets, from strutting their creative heritage on the global stage.

What came before in a special era that protected and promoted the arts was one of the richest music scenes anywhere in the world. Although Sudanese styles are endlessly diverse, this compilation celebrates the golden sound of the capital, Khartoum. Each chapter of the cosmopolitan city's tumultuous musical story is covered through 16 tracks: from the hypnotic violin and accordion-driven orchestral music of the 1970s that captured the ears and hearts of Africa and the Arabic-speaking world, to the synthesizer and drum machine music of the 1980s, and the music produced in exile in the 1990s. The deep kicks of tum tum and Nubian rhythms keep the sound infectious.

Sudan of old had music everywhere: roving sound systems and ubiquitous bands and orchestras kept Khartoum's sharply dressed youth on their feet. Live music was integral to cultural life, producing a catalog of concert recordings. In small arenas and large outdoor venues, musical royalty of the day built Khartoum's reputation as ground zero for innovation and technique that inspired a continent.

Musicians in Ethiopia and Somalia frequently point to Sudan's biggest golden era stars as idols. Mention Mohammed Wardi — a legendary Sudanese singer and activist akin to Fela Kuti in stature and impact in his music and politics — and they often look to the heavens. A popular story is of one man from Mali who walked for three months across the Sahel to Sudan because the father of the woman he wanted to marry would only allow it if he got him a signed cassette from Wardi, aka "The Last King of Nubia," himself. Saied Khalifa is said to be the one of the few singers to make Ethiopian emperor Haile Selassie smile.

Such is the stature of Sudanese singers and the reputation of Sudanese music, particularly in the "Sudanic Belt," a cultural zone that stretches from Djibouti all the way west to Mauritania, covering much of the Sahara and the Sahel, lands where Sudanese artists are household names and Sudanese poems are regularly used as lyrics until today to produce the latest hits. Sudanese cassettes often sold more in Cameroon and Nigeria than at home.

But years of anti-music sentiment have made recordings in Sudan difficult to source. Ostinato's team traveled to Ethiopia, Somalia, Djibouti, and Egypt in search of the timeless cultural artifacts that hold the story of one of Africa's most mesmerizing cultures. That these cassette tape and vinyl recordings were mainly found in Sudan's neighbors is a testament to Sudanese music's widespread appeal.

With our Sudanese partner and co-compiler Tamador Sheikh Eldin Gibreel, a once famous poet and actress in '80s Khartoum, Ostinato's fifth album, following our Grammy-nominated "Sweet As Broken Dates," revives the enchanting harmonies, haunting melodies, and relentless rhythms of Sudan's brightest years, fully restored, remastered and packaged luxuriously in a triple LP gatefold and double CD bookcase to match the regal repute of Sudanese music. A 20,000-word liner note booklet gives voice to the singers silenced by an oppressive regime.

Take a sail down the Blue and White Nile as they pass through Khartoum, carrying with them an ancient history and a never-ending stream of poems and songs. It takes two Niles to sing a melody.