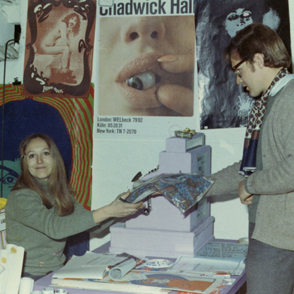 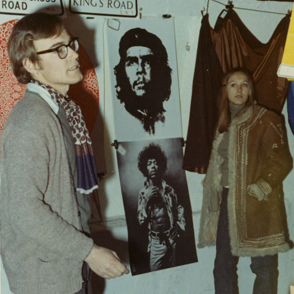 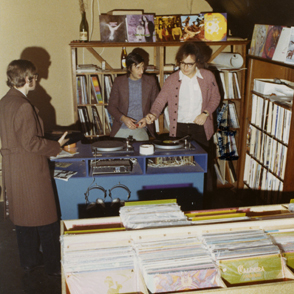 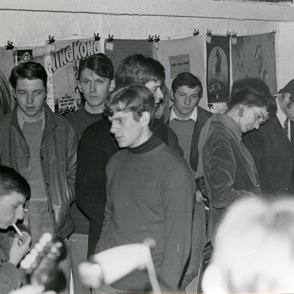 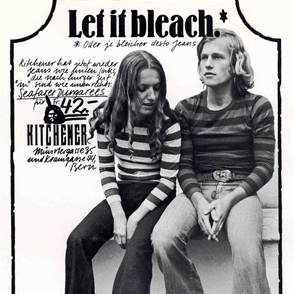 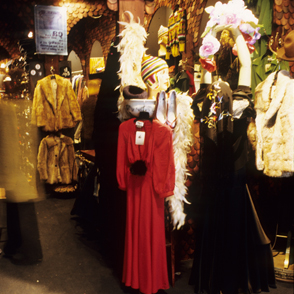 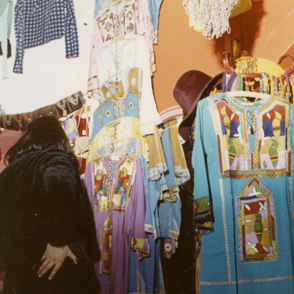 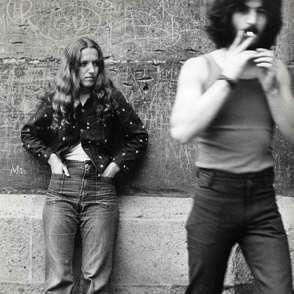 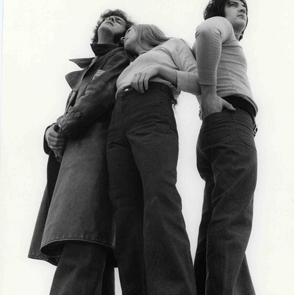 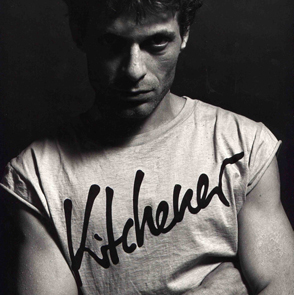 For 50 years now, Kitchener has been enriching the Swiss shopping scene and can look back upon a vibrant history. Take a look at our timeline!

1967 Foundation of the Kitchener boutique by Eva and Jürg Huber and their business partner Subo Mischer. Opening of the 40 m2 basement premises at Gerechtigkeitsgasse 11, Bern, where used fur coats from Afghanistan are sold along with Indian jewellery, hippy posters as well as items from Swinging London – like records from the Rolling Stones, The Birds or Grateful Dead, which are very hard to find these days. At the same time, the founders are producing posters in colour under the brand Speedprint for the Swiss retail business. Amongst the motifs are for example sports pictures of Jo Siffert, Jim Clark and the Swiss alpine skiing stars. The most memorable poster, however, is surely the first colour picture of the earth, taken out of the Apollo 11 space shuttle.

1969 Relocation to a larger store at Münstergasse 35, Bern. The walls of the store are created by the French artist Jean Mobulès and bedazzle with psychedelic colours and patterns. Mobulès also accounts for painting the cow who is promenading the streets of Bern as a marketing gag to mark the opening event. For more information, see the newspaper article from the Tagwacht, dated 1969. The shop soon becomes the address of choice for the youth of Bern, particularly amongst the "flower children", who are able to purchase there their beloved “Seafarer Dungarees”, the original flares of the US sailor uniform. Also on the shelves and coming right out of London’s Carnaby Street, the cult shoes by Terry De Havilland (artist Meret Oppenheim frequents the shop only because of them), sixties fashion by Ossie Clark, suede fringe jackets, the first Spanish riding boots by Vaquero as well as hooded sweatshirts and college jackets imported directly from the USA. Another highlight form this year are the Seafarer Dungarees which are bleached at home during the night and which are promoted through the legendary “Let it Bleech” poster.

1972 Opening of another 80 m2 store at Kramgasse 40 in Bern, showing off a spectacular hall of mirrors and Art Nouveau decorations. Soon emerging as the absolute bestseller are the striped dungarees for children from the brand Osh Kosh, imported from the USA.

1975 Take-over with a business partner of the restaurant Aarbergerhof in Bern, where the store is still located at present at Aarbergergasse 40 as well as opening two new stores in this unique store gallery, which dates back to the fifties. Along with the already renowned product range of Kitchener, an Army Navy Surplus shop comes into existence. The restaurant is being renovated completely, reopens as French brasserie and soon evolves into a household name in the gastronomic scene in Bern. It is the time of the private views in the Kunsthalle Bern orchestrated by the great Harald Szeemann. Sigmar Polke, along with many upcoming stars of the young and wild art scene, frequents the "Araber", as the restaurant is fondly called. At the new Kitchener store location, a first change becomes apparent – namely the transformation into a concept store. Windsurf boards, just about to become hip in the US, are added to the product range and the first skateboards are imported from California.

1978 With the ambition to improve the management of the company, the two stores located at Kramgasse and at Münstergasse are closed and an additional space at Aarbergerhof is rented. Noticing the turn of the tide, the Army shop is turned into a skateboard shop. At the same time, the brand Kitchener Skateboards is established and the distribution of trendy brands like G&S Skateboards, Sims, Alva, Powell Peralta, SantaCruz, Vision Skateboard, ACS, Tracker, Road Riders and Kryptonics in Switzerland is built up in parallel. Also, Winterstick – the first snowboard – is introduced to the product range. Kitchener starts to produce and distribute own skateboards in Switzerland under the brand Hooger Booger. The very first Kitchener nylon bag, printed with the heads of American Indians, comes into existence – only to become a faithful companion of young and old for decades to come.

1979 Besides skateboards, now also roller skates are on display. The white basketball shoes by Big Star, combined with super soft Kriptonics wheels and ACS, become a big hit in the beginning of the eighties.

1982 Foundation of Kitchener "Sportingoods by Kitchener" at the existing premises as new crossover store of sport and fashion, offering a mix of high quality durable goods within the areas of trekking, free climbing, skiing, windsurfing, skate and snowboarding and functional clothing, featuring brands like Patagonia, The North Face, Sierra Designs, Madden, but also Jet Set and many more. The store orders the first hand-made snowboards from Peter Fässer, equipped with binding, steel edges and a P-tex coating from the skiing sector. Simultaneously, Kitchener Sportingoods imports boards by the US-brands Sims und Burton. Based upon the first hand-made snowboards, the Swiss company Nidecker is entrusted with the manufacture and worldwide distribution of Kitchener’s own Hooger Booger snowboards. The launch of the first asymmetrical snowboards marks a novelty. In 1986, Zurich-born snowboarder José Fernandez wins on these boards first the Swiss Championship title, then also becomes word champion in Giant Slalom.

1984 The purchasing team undertakes their first shopping tours to Madagascar, Africa, India and to the Himalayan region, returning with unique accessories of local flavour for the store. Ever since, Kitchener’s range of accessories is very much characterised by its ethnic style. During countless journeys to the USA, the purchasers discover not only high quality outdoor products, but also bring back home repeatedly unique toys like plastic dinosaurs, robots, stationary and many more. Besides, it is the time of the western boots by Tony Mora and others.

1989 Kitchener Sportingoods sells its own brand Hooger Booger to the sporting goods giant Scott USA, who continues its distribution. Besides the skate shop at Aarbergerhof, distribution is focussing on building up step by step the skating brands Ês, Ernies, Emerica, Vision, the American snowboard brand Ride as well as the snowboot brand Thirtytwo and the snowboard brand 686. The following years are characterised by the emergence of a streetwear culture amongst youth, thus boosting growth of skating shoes and sneakers. Kitchener Sportingoods, later called KSG, becomes an important market player with its range of brands.

1990 In the nineties, Kitchener gradually expands its sales area to a total of 450 m2. Having set out as a small start-up, it has now turned into a large concept store, catering to fashion lovers of all ages by offering a comprehensive range of clothing, shoes and accessories as well as by setting themselves apart through its distinct assortment policy.

1996 The popular Kitchener nylon bag gets to be part of a song by Züri West ("Sofa") – so there is no longer the slightest doubt that the bag has reached cult status and has become an inherent part of everyday vocabulary in the Bernese region. In the same year, the own brand Kitchener Items goes into production with their first in-house designed t-shirts. Through the indigenous production, a distinctive line of fashionable everyday items emerges, which makes for an important part of the assortment till this very day.

2006 Continuing the successful Kitchener concept, an additional 150 m2 is rented in the back of the Aarbergerhof, where "Kitchener Plus" establishes itself. "Plus" is a kind of grown-up version of Kitchener, featuring a fine selection of high quality designer labels and exclusive products.

2010 Venturing out of the capital: In Zurich’s new vibrant shopping area „Im Viadukt“, Kitchener Plus opens in the „Bogen 19“ (arch 19) its first branch of Kitchener Plus. Located in the booming industrial
District 5, the shop is soon the place to refuge to for every homesick exiles from Bern as well as for all fashion-lovers from Zurich city.

2011 Owing to the huge success of the Zurich branch, the shop expands by another arch in December 2011. While in arch 20 the men’s collections are showcased, arch 19 displays women‘s and children’s brands.

2012 At the end of July 2012, the wall between the two arches is broken through and the stores connected, thus making room for a spacious 200 m2 concept store.