LP with Gatefold
with a 16-page booklet with 50 pictures. 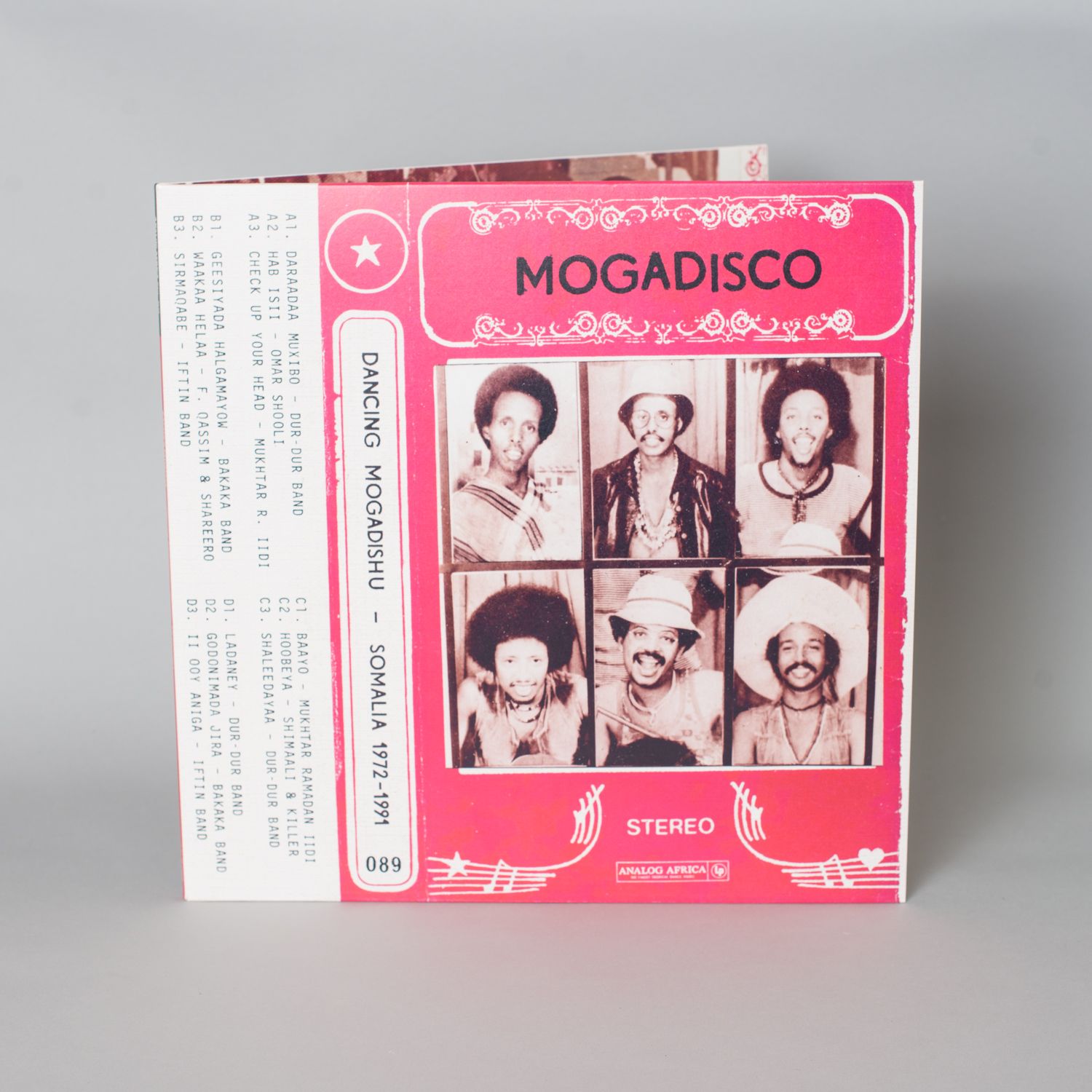 After being blown away by a few tunes – probably just as you will be after listening to this
- Samy Ben Redjeb travelled to the infamous capital city of Somalia in November of 2016,
,aking Analog Africa the first music label to set foot in Mogadishu.

On his arrival in Somalia Samy began rifling through piles of cassettes and listening to
reel-to-reel tapes in the dusty archives of Radio Mogadishu, looking for music that “swam against the current”.

The pile turned out to be a cornucopia of different sounds: radio jingles, background music,
interludes for radio programmes, television shows and theatre plays.
There were also a good number of disco tunes, some had been stripped of their lyrics, the interesting parts had been recorded multiple times then cut,
taped together and spliced into a long groovy instrumental loop. Over the next three weeks, often in watermelon,
grapefruit juice and shisha-fuelled night-time sessions behind the fortified walls of Radio Mogadishu,
Samy and the archive staff put together “Mogadisco: Dancing Mogadishu, 1974–1991”.

Like everywhere in Africa during the 1970s, both men and women sported huge afros, bell-bottom trousers and platform shoes.
James Brown, Stevie Wonder, Marvin Gaye and The Temptations’ funk were the talk of the town.

In 1977, Iftin Band were invited to perform at the Festac festival in Lagos where they represented Somalia
at the Second World Black and African Festival of Arts and Culture.
Not only did they come back with an award but they also returned with Afrobeat.
While Fela Kuti’s ‘Shakara’ had taken over the continent and was spreading like wildfire throughout Latin America,
it was the track ‘Lady’ that would become the hit in Mogadishu.

At the same time Bob Marley was busy kick-starting reggae-mania in Somalia, which became such a
phenomenon that even the police and military bands began playing it.
Some say that it was adopted so quickly because of the strong similarities with the traditional beat
from the western region of Somalia, called Dhaanto.

But then suddenly the trousers got tighter as the disco tsunami hit the country.
Michael Jackson appeared with a new sound that would revolutionise Somalia’s live music scene.
You couldn’t walk the streets of Mogadishu without seeing kids trying to moonwalk.

“Somalia had several nightclubs and although most use DJs to play records, some hotels like Jubba, Al-Uruba
and Al Jazeera showcased live bands such as Iftin and Shareero” -
so ran a quote from a 1981 article about the explosion of Mogadishu’s live music scene.
The venues mentioned in that article were the luxury hotels that had been built to cover the growing demands of the tourist industry.
The state-of-the-art hotel Al-Uruba, with its oriental ornaments and white plastered walls, was a wonder of modern architecture.
All of Mogadishu’s top bands performed there at some point or another, and many of the songs presented in this compilation were created in such venues.

Mogadisco was not Analog Africa’s easiest project. Tracking down the musicians - often in exile in the diaspora
- to interview them and gather anecdotes of golden-era Mogadishu has been an undertaking that took three years.
Tales of Dur-Dur Band’s kidnapping, movie soundtracks recorded in the basements of hotels, musicians getting electrocuted on stage,
others jumping from one band to another under dramatic circumstances, and soul singers competing against each other,
are all stories included in the massive booklet that accompanies the compilation - adorned with no less then 50 pictures from the ‘70s and ‘80s.

As Colonel Abshir Hashi Ali, chief don at the Radio Mogadishu archive - someone who once wrestled a bomber wielding
an unpinned hand-grenade to the floor - put it: “I have dedicated my life to this place. I’m doing this so it can get to the next generation;
so that the culture, the heritage and the songs of Somalia don’t disappear.”

(EN) For a decade now, Samy Ben Redjeb’s seminal Analog Africa label has been unearthing the best in both explosive foot-shufflers and hypnotic sauntering treasures from Africa. It’s achieved more than most in celebrating the rich and diverse heritage of a much misunderstood and overlooked continent. Samy has spared nothing in his pursuit of choosing authentic and eye-opening choice records. His lifestyle and string of various jobs—from a Life Aquatic sojourn as a diving instructor in Senegal to a stint as a Lufthansa flight attendant crisscrossing the Lagos-Addis Ababa-Accra arc and beyond—have all been centered on a passion for crate digging.
Samy Ben Redjeb at his home in Frankfurt (Germany)

Samy’s inaugural kickstart happened in Dakar, where he first set up a makeshift club night at a hotel. He played an abundance of previously forgotten polyrhythm hotsteppers and dancefloor-beckoning Afro R&B howlers before embarking on the countless misadventures that would define and bear fruit as the Analog Africa record label. Starting with the sun-ripened lilt and cantering Green Arrows of Zimbabwe in 2006, and honing in on the key era of the late 1960s to early 1980s, Samy reintroduced his audience to the raw psychedelic sounds of Benin and Togo: from the now iconic African Scream Contest to the self-coined “Islamic funk belt” and heaventilting horn sections of Ghana on Afro-Beat Airways to the ethereal mystery of landlocked Burkina Faso with Bambara Mystic Soul, and the salacious accordion and Ferro-scrapped dynamism of Cape Verde’s infectious and previously banned Funaná, appearing on the reissue of the legendary archipelagos export Bitori Nha Bibinha. The story of African music, with its long-forgotten footnotes and often ignored links, has also enjoyed enlightening reappraisals—such as the Congolese maestro of electric guitar, Georges Mateta Kiamuangana, otherwise known as Verckys (anointed as “Mister Dynamite” by an astonished James Brown after watching him perform) and the mightiest funk ensemble in all of Africa, the Orchestra Poly-Rythmo de Cotonou.

By dusting off rare finds, locating those responsible, and in many cases interviewing the principle team or artist behind these iconic recordings, the allencompassing journey from transforming the source material into a sumptuous (and on occasion award-winning) objet d’art is documented for posterity.